Wired for Simplicity – from Amacoil

The article “Wired for Simplicity” was published in 2003 by Amacoil. In this article, Showmark LLC’s products are highlighted as a high-tech precision option that is exceptionally user-friendly.

When fiber optic manufacturers need to transfer or rewind the fiber, ease of use and precision are two qualities they need in their winding machines.

While it’s true that fiber optic wire manufacturers typically incorporate some type of high-speed winding system intro their extrusion line to “spool” the fiber or rewind the fiber for distribution, smaller specialty fiber manufacturers and their distributors don’t necessarily need these pricey, sophisticated systems. When filling customers’ orders, they often need to take an existing bulk spool of fiber and break it down into smaller spools.

“We bought (the Showmark machine) to supplement our own custom made pre-winding machines. It’s very compact and portable. It is precise, and very easy to understand and use,” he adds.

Showmark’s initial product, the FS-230, was designed for precision winding applications in the telecommunications industry. The FS-230 is used for producing small precision-wound spools of fiber that are placed in erbium-doped fiber amplifiers (EDFAs), which are key components in today’s high-bandwidth communications systems.

The FS-230 uses a Galil 3-axis servo controller to coordinate the movement of a linear servo motor-based traverse head with the winding speed of the machine. It also provides closed-loop tension control based on feedback from a tension transducer made by Electromatic. The result is layering and placement of the fiber with controlled tension as the spool is wound.

The FS-230 has also been used for producing coils of fiber optic wire that go into fiber optic gyros (FOGs). FOGs have become the standard sensing element used in guidance systems for ships, aircraft, and robots; and in the near future they will make satellite television reception possible in cars.

Although the FS-230 was well received, feedback from potential users indicated that they wanted something much simpler for general purpose respooling. Showmark’s challenge was to find a control system that was simple to use, small, and low cost, yet intelligent enough to provide flexible control and consistent results. Among the basic requirements was a need to synchronize the linear speed of the traversing material guide with the rotation speed of the take-up spool. The speed and traverse range had to be easy to adjust. The machine also had to accurately track fiber length without damaging the material.

With fiber optics, unique design issues must also be considered such as the minimum bend radius of the fiber. The material is easy to stress if too much line tension is applied during the winding process. If bending occurs, the fiber’s light transmission properties can be affected.

Some fiber optic materials must be wound at extremely constant take-up rates. As the take-up spool fills up, its rotational rate must be reduced to compensate for the increasing circumferential length the material is being wound around. Additionally, the linear traverse must slow down as well to keep the material even and smooth.

Showmark engineers discovered Amacoil, Inc. (www.amacoil.com) and found its reciprocating linear drive provided automatically reversible linear motion control without the complex controls and programming normally associated with servo and stepper control systems. The shaft is smooth so it won’t trap dirt and debris that can lead to clogging and jamming.

“We were able to use a single dc motor to drive both the take-up spool and the linear traverse which made the controls much simpler,” says Scott Markovitz, founder and head engineer at Showmark.

Additional features attractive to Showmark designers were adjustable pitch and variable stroke length. “The variable pitch makes the system flexible,” says Markovitz. “It means the customer can fine tune the winding procedure to enhance a level, smooth wind. It also lets the customer wind fiber of different diameters on the same machine – without having to change gear heads or invest in electronic controls.”

Showmark is also using its technology to develop equipment for new markets such as fine wire and cable winding, for example, magnet wire. 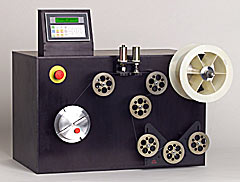 ABOVE: The Showmark FS-230 fiber optic winder is designed for fast winding of fiber into application-specific take-up spools. The machine includes a tension controller and an electronically controlled clamp-and-cut system. THE SHOWMARK FS-10 fiber optic winder is an easy-to-operate tabletop winder featuring a built-in line counter and tension control. The linear motion of the fiber guide is automatically synchronized with the take-up drive motor without electronics or programming.

SPOOLS OF FIBER OPTIC MATERIAL are clamped to the steel framework of the Showmark custom-designed winder. The fiber is then re-spooled for distribution. The photo above right shows a close-up of the traverse winding system.