OEM Winds Up – from IEN

In the article “OEM Winds Up with Just the Right Driver” published in 2003 by IEN: Industrial Equipment News, Showmark LLC’s respoolers and winders are featured for their exceptional design. IEN shares how Showmark manufactures respoolers at a lower cost than the competition but with a higher level of precision and ease of use.

OEM Winds Up with Just the Right Driver

Fiber optic manufacturers typically incorporate some type of winding assembly into their extrusion lines to “spool” the fiber for distribution. Although spooling system options abound, Showmark Machines found a niche from which they were able to launch what has become a successful OEM business specializing in winding equipment.

Showmark’s strategy has been to simplify machine design to cut costs, conserve space, and facilitate operation and maintenance. And Showmark engineers have relied on Amacoil, whose reciprocating linear drive provided automatically reversible linear motion control without complex controls, additional components and programming. Additionally, an Amacoil system isn’t screw-based. The shaft is smooth so it won’t trap dirt and debris that can lead to clogging and jamming.

The Showmark FS-10 fiber optic winder shown here, incorporating the Amacoil drive system, is an easy-to-operate tabletop winder featuring a built-in line counter and tension control. The linear motion of the fiber guide is automatically synchronized with the take-up drive motor without using electronics or programming.

Initially, Showmark founder Scott Markovitz interviewed users of fiber optic winders at the Optical Fiber Conference show, and was not surprised to discover most expressed a desire for a winder that was simpler to operate, more compact, and less expensive than those available at the time. “We estimated that about four times as many of our prospects preferred a compact, less sophisticated winder, as opposed to the large, floor-mounted machines.”

Showmark’s debut product weighed about 70 pounds. The winder uses a 3-axis servo controller to coordinate the precision movement of the linear traverse, and to control the tension in the fiber. A tension sensor is attached to one of the bottom rollers. The signal from the sensor is continuously monitored by the servo system. Corrections to line tension are made in real time by advancing or retarding the motion of the payoff reel.

The benchtop unit was released at roughly half the selling price of its larger counterparts. “Our main market,” said Markovitz, “is for very simple general purpose respoolers which can be used for breaking down bulk spools into smaller spools for distribution.” Previously, the only choice was to use the same spooling equipment that was being used for high-end applications such as fiber test proofing, coating, and fiber coloring. Showmark provided a more practical machine offering basic features for “everyday use.”

Showmark’s first customer was a company in the telecom industry whose fiber optics were doped with erbium, a rare-earth metal that naturally amplifies light. Special spools are used for winding erbium doped fiber amplifiers (EDFAs) and fiber optic gyros (FOGs). There can be no crossover on the take-up spool, which typically has a very narrow core width. Also essential is proper line tension.

The basics of a winding system include a take-up spool, usually driven by a DC motor. A payoff system feeds the extruded fiber, or other material, onto the rotating take-up spool. The payoff may be feeding directly from the extrusion production line. Also needed is a “linear traverse” or “traversing nut,” a linear drive assembly that guides the fiber back and forth as it is wound onto the spool.

Depending on the diameter or thickness of the material being wound, the traverse must move back and forth at a set linear “pitch.” This is the linear distance the traverse travels per one shaft revolution. The pitch differs for each different diameter of material that is to be spooled. Proper pitch setting is required to assure even placement of lines on the reel. So rotational speed of the take-up reel must be synchronized with the linear speed of the traverse.

With fiber optics, other unique design issues must also be considered such as the minimum bend radius of the fiber, since if bending occurs, the fiber’s light transmission properties can be affected.

Some fiber optic materials must be wound at extremely constant take-up rates. As the take-up spool fills up, its rotational rate must be reduced to compensate for the increasing circumferential length the material is being wound around, and the linear traverse must slow down to keep the material even and smooth. Special motion control is required over the traverse guide moving the fiber back and forth as it is wound onto the spool.

Precise constant tension control while winding the fiber is often needed, usually in the 10-30 gram range. If the payoff system is feeding out line at a slower rate than the rotation of the take-up reel, too much line tension can result. Conversely if the take-up drive is running faster than the payoff, it will pull the line, increasing the tension. A linear traverse with too much thrust can also create line tension levels that can damage fiber optics.

The coating on doped fibers is easily damaged, so the surface area of the fiber needs to be friction-free during the winding process. To assure smooth, frictionless take-up, the bearings in the winding assembly must be highly efficient. And winding fiber optic material typically requires precision placement of the fiber on the take-up spool in perfectly even rows and smooth layers. Consequently precise synchronization of the take-up spool rotation with the movement of the traversing material guide must be achieved. If the system slows down or speeds up, this synchronization must remain constant.

“We found the traditional controls and components required for controlling the motion of the traverse guide made the machines larger and more complicated to operate,” said Markovitz. Showmark engineers had considered ball screws and belt drive assemblies for their winder. These methods required stepper or servo motors to control the movement of the traverse.

Also needed was a separate motor for the spool drive. Examining other types of linear drive systems, Showmark found that the requirements for multi-speed, direct braked reversible motors, valves and solenoids, gear head assemblies, and so forth, added significantly to the size and complexity of the machine design, and significantly increased operating and maintenance expenses.

Showmark went with the Amacoil system because it eliminated the need for extra motors, controllers, electronics and programming from the machine design. The picture shows a typical Amacoil winding assembly setup in a custom Showmark winder. Large, heavy spools of fiber optic material are clamped to the steel framework; the fiber is then re-spooled for distribution. “We were able to use a single DC motor to drive both the take-up spool and the linear traverse,” said Markovitz, “which made the controls much simpler.” The Amacoil unit also enabled Showmark to design a more compact unit, which was even lighter-weight than the original benchtop winder.

This close-up view shows the traverse winding system. A single DC motor behind the faceplate drives both the take-up reel and the Amacoil traverse, which remains synchronized with the reel rotation without electronics or programming.

Additional features attractive to Showmark designers were adjustable pitch and variable stroke length. “The variable pitch makes the system flexible,” said Markovitz. “It means the customer can fine tune the winding procedure to enhance a level, smooth wind. It also lets the customer wind fiber of different diameters on the same machine — without having to change gear heads or invest in electronic controls.”

Incorporating the Amacoil drive system led to the release of Showmark’s second generation machine. This model permitted linear pitch adjustment without adjusting controls or changing gear assemblies. “The new unit was more general purpose. Many different types of fiber could be spooled using a single unit because the pitch and travel direction of the traverse guide could be mechanically controlled,” said Markovitz.

Showmark also found that, with simple modifications, they could configure the general-purpose unit to meet many precision winding requirements. “Our design is flexible and modular so we can rapidly modify machine design to meet specific winding requirements,” said Markovitz. Showmark has already sold a modified version of the general winder to a manufacturer who is using it to spool FOGs. Markovitz sees few obstacles to design the winder to meet virtually any fiber optic spooling demands presented.

Recently Showmark has been using their technology to develop equipment for new markets such as fine wire and cable winding. Magnet wire, for example, is often fragile and the Showmark winder provides the steady movement and smooth reversal needed to make sure the wire doesn’t twist or snap.

The original article can be found at http://www.ien.com/. 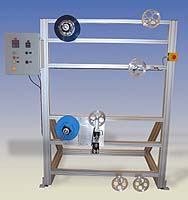 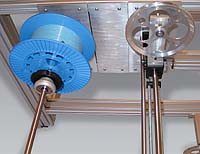