3D Printer Filament Supplier uses Winders from Showmark by Scott Markovitz President of Showmark, LLC 3D printing has been hailed as one of today’s revolutionary technologies. The cost has dropped substantially in recent years, and proponents say the devices will eventually be in every home. They will fundamentally change the way we procure simple items. Showmark, LLC has been pleased to work with inDimension3, a major player in the 3D printing business. inDimension3 is known for producing high quality, low cost printers that are able to print objects as large as 16x16x21 inches. They also sell a wide variety of the consumable ABS, PLA, and Nylon 3D printing filaments that are used with many 3D printers from other manufacturers. inDimension3 uses Showmark’s Modular Takeup System (MTS) and wire payoff units to wind the spools and coils of material from their bulk supply spools. The MTS is a reliable and easy to use filament winding machine that produces spools and coils with neat and even layers of material. It measures the filament length as it winds and stops automatically at a desired length. The modular systems can be stacked on top of each other, so the capacity can grow with demand. Showmark’s easy to use payoff system controls the tension in the material as it winds. Just think, the next time an appliance breaks down in your home, you won’t have to call a repairman or wait for a part to be delivered. Instead, you’ll download a computer file and quickly “print” the new part yourself. It’s just like printing anything from your computer – except it will be a solid object that can be put to immediate use. Instead of an ink cartridge, objects are usually printed from a spool of plastic -or even metallic – 3D printing filament. The filament is melted as it is pulled through a heated print head. It is then precisely sprayed down in many layers to produce an object. Artists, Designers, and Engineers use 3D printers to instantly bring their creations to life. See Payoffs and Takeups Download Payoffs and Takeups Brochure Spooling Data Input Request Form 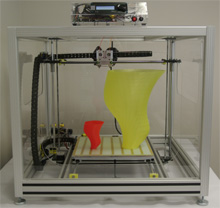 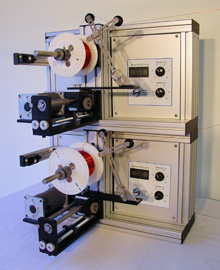 Two Showmark Modular Takeup Systems stacked on top of each other. 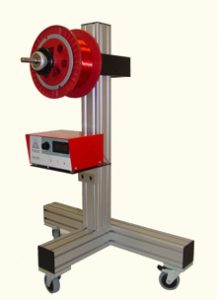